My Journey with Goddesses and the Feminine Divine 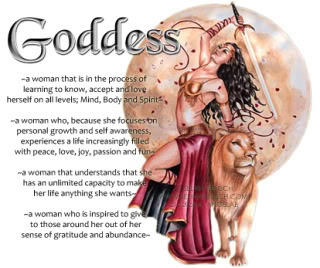 For me Goddess is the female aspect of The Divine and holds equal power but it is expressed differently. Empowerment for women is only seen as radical to those that have difficulty with the idea that woman are people too. I think the same is true for the patriarchal religions that refuse to acknowledge the roles Goddesses have played throughout history as an equal but different aspect of the Godhead.  I was going through a divorce when the Gloria Steinem, Helen Reddy and Helen Gurley Brown started beating the drum and letting women know that we could be strong, equal, powerful…and FEMININE within the Feminist Movement.

I started my relationship with the Feminine Divine around the same time.  That journey opened my heart and mind in gentler ways and put me in touch with my own spiritual power. As I developed greater understanding about the spiritual and historical energy of Goddesses I began to connect with more soul sisters who are at varying stages of embracing the Goddess within themselves.

I have found that as more women come into their own power we are more adept at encouraging men to explore the full range of their emotions…rather than having them stuck in gender stereotype.  Embracing the Feminine Divine does not focus on emasculating men or have them become like women. . Rather the goal is to have both genders become whole, strong and empowered as they balance the Masculine and Feminine Divine within. 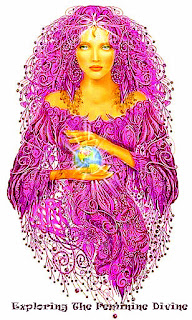 After studying the historical and spiritual significance of Goddesses and their role in many religions around the world I could not help but notice their absence in the dominating religions of Christianity, Judaism and Islam. Goddesses have a larger presence in Hinduism and I have a lot about them by studying their teachings.  I admit to being   pro-women but I am also pro-men and pro-gender equality.  After growing into my own power through the feminist movement I made a commitment to myself and others to promote the idea of Ms. God and the Feminine Divine and their importance in the spiritual development of both genders Looking at history ("her-story") and the roles of Goddesses is fascinating journey. Once women...and men open to the powerful gifts Goddesses bring they enjoy a greater sense of wholeness that comes through the subtle grace of the Divine Feminine within.  We are all a cell in the body of Goddess and Goddesses dance in our every breath.  Feminism is not a rebellion or a revolt, but based on the simple truth and assumption that all people are created equal. Not just all 'men' as many religions suggest.  There are still millions around the world that have difficulty with that reality. As more women and men embrace the Feminine Divine there is hope that we can level the playing field, see common ground and EQUALITY. If and when that does occur gender, race, creed, culture and religious acceptance will become the new order 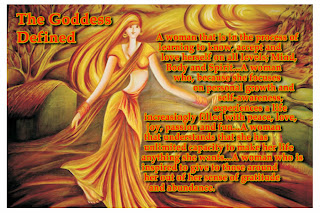 When we are aligned to the flow of wholeness it is easier to look back, move forward and live more conscious lives.   As I continue to open to the Divine Feminine I am becoming stronger and continue to go through transformational re-births while standing on firmer ground.  As we embrace the Feminine Divine we are more able to continuously evolve and change. The energy of Goddesses assists us in seeing beyond what pain is and what it brings forth. That allows us to grow, emerge and fly free like the beautiful butterflies we are all mean to be.   Opening to the Masculine and Feminine Divine within helps us to to acknowledge truth, accept difference and diversity and come into full surrender. Blessed by the Divine Sacred Mother we are free and able to express more of whom we are. We are filled with love and light and lose the need to compare ourselves with others or make them wrong because we also see their uniqueness shining brightly within unity and oneness.

In my healing and spiritual journey I am at a place where I know I am more than just a woman. Whether we are a mother, grandmother, sister, an aunt, beloved or friend we all hold many names but as we open to the Divine Goddesses we become ONE with ourselves and each other. When we accept that we are spiritual beings going through human experiences the outer definers dissolve and we are able to see ourselves as Divine beings of nurturing love. 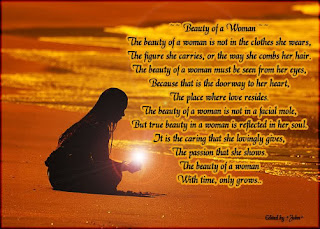 I honor my place as a conduit and strive to open to the bright light of the Divine Mother and all other spiritual guides that come to me as allies. There are many who wish to gain enlightenment in a man's form but that is not so for me.  With the diminishing of women’s power through time fewer BEINGS fewer chose to   work for the welfare of living beings in a female form.  I fully accept that I was born into a female body in this lifetime so I am in a better position to work for the welfare of all beings until such time as humanity has found its fullness by acknowledging and embracing the Divine Feminine.The knowledge of the DIVINE GODDESS is on Earth right now to help us through Ascension; it is within each of us, Women and Men. This is an activation of the GODDESS that is within us all 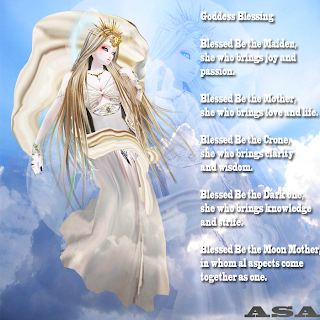 Posted by Embracing the Feminine Divine at 20:23

Embracing the Feminine Divine
For me Goddess is the female aspect of The Divine and holds equal power but it is expressed differently. Empowerment for women is only seen as radical to those that have difficulty with the idea that woman are people too. I think the same is true for the patriarchal religions that refuse to acknowledge the roles Goddesses have played throughout history as an equal but different aspect of the Godhead. I